By Trust Company of the South 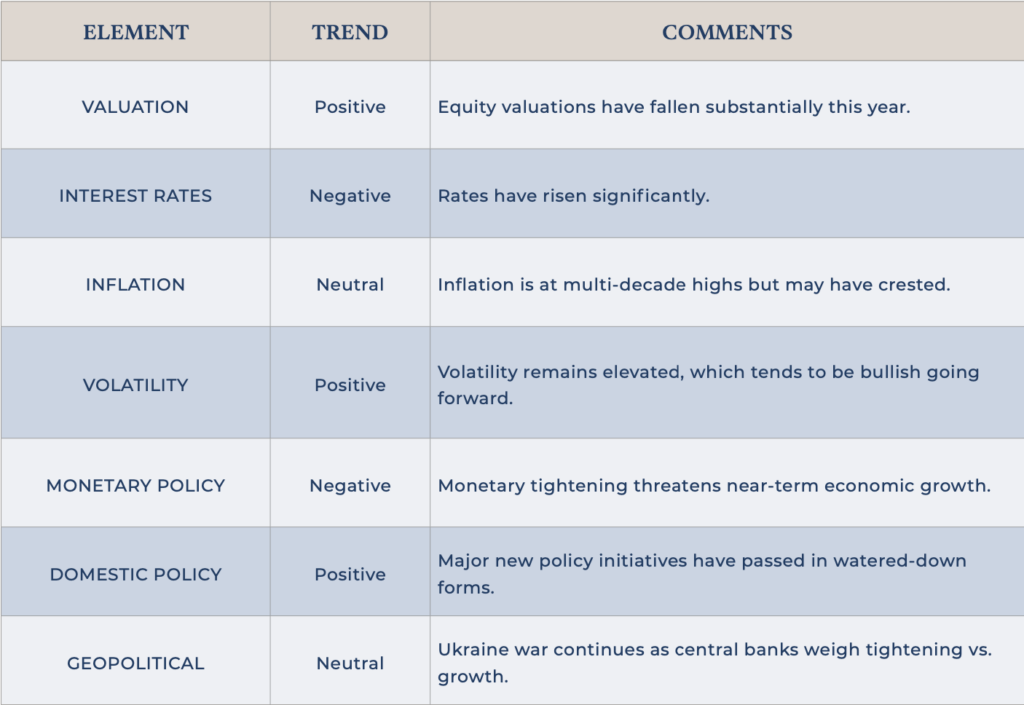 With sincerest apologies to the legendary band Earth, Wind & Fire, I believe I can speak for most investors when I say I do not wish to remember the 21st night of September this year, or really, any day or night of that month at all. Markets continued the swoon that began in August, with all major U.S. market indices posting significantly negative returns.

If August was about Fed Chairman Powell telling markets that the Fed’s actions would result in a slower economy, then September was about the Fed’s actions themselves. The Fed delivered yet another 75-basis-point rate hike on, yes, September 21, its third such increase in a row. It may seem difficult to believe, but on Cinco De Mayo, the date of the first triple raise, the Fed funds rate was 0.75 percent. When we woke up on the first day of autumn, the rate was 3.25 percent. That is an increase of 4.3x, just a staggering change in the Fed’s baseline interest rate, and markets are pricing in at least another 50-basis-point increase in November.  That would bring the Fed funds rate to three full percentage points about its levels in May. With the price of money having changed so, it is little wonder that liquidity has receded from markets, that the U.S. dollar is surging, and that assets of all kinds have been re-priced.

The major U.S. equity indices (S&P 500, Dow Jones, and the NASDAQ) each finished the month down roughly 6 percent on a total return basis. The yield on the 10-year Treasury, which began the month at about 3.2 percent, topped 4 percent on the 27th  week before dropping back slightly to end the month at 3.8 percent.

Of course, it is easy to look in the rear-view mirror and say, “well, of course,” when in fact, market actions and reactions are seldom obvious. It was only a year ago when the Fed and many market observers were calling the dramatically higher price inflation we were experiencing “transitory” and expecting it to quickly revert to manageable levels. Well, the market consensus was mistaken about inflation, just as the market is often “mistaken” about lots of things—stock prices, commodity prices, and interest rates for example. But the market’s “mistakes” are just its process of finding equilibrium over time, and the market does tend to be really good at that. That’s why as soon as the consensus becomes that we will have permanently high inflation and much higher interest rates, and that first below-expectations CPI number comes out, or that first jobs report comes out that suggests the economy is slowing and does not deserve another chokehold by the Federal Reserve—and the markets rip higher—it will have paid to behave as if markets are more efficient than they actually are.

The price carnage in the S&P 500 year-to-date is significant—the index now has a total return for the year of -21 percent. The intra-year decline at its lowest was 24 percent—that’s good for 7th worst in the last 42 years. Even so, it’s perhaps worthwhile to bear in mind that during that period the market has experienced an average intra-year drawdown of 14 percent and has finished positive in 32 of those 42 years. Moreover, there have been worse intra-year declines that still finished positive for the year. That would certainly be a rosy outcome indeed, and it would sure seem like an aggressive bet to make with only three months left in the year, but perhaps the greater point is that, empirically speaking, an investor’s odds of success are higher when valuations are lower, and valuations have certainly fallen fast and hard—from 21.4x forward earnings for the S&P on January 3 to 15.4x yesterday. That’s been a painful process, but one’s odds of future positive outcomes have risen.

With as swift as the declines have been this year (and this month), it has also been easy to forget how far we have come. For the third quarter, the S&P 500 is down just 1.4 percent on a total return basis. Going to end of the first quarter of 2020, in the teeth of COVID, the S&P 500 has delivered a total return of almost exactly 50 percent (17.5 percent annualized).

For more information, please reach out to: