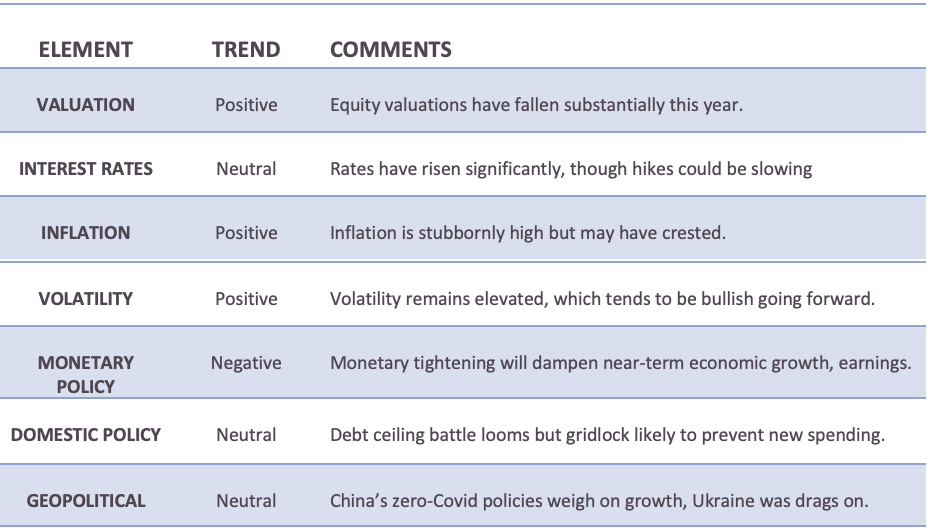 Investors had good reason to go back for seconds this Thanksgiving. Even though it’s been a disappointing year in the markets, November was another good month, and it came on the heels of a historically powerful October, marking the first back-to-back positive months of the year.

Yes, Thanksgiving came a few weeks early for investors this year. It came with the October consumer price index report, which revealed that the CPI rose by 7.7 percent in October versus a year ago, still warm but lower than expectations of 7.9 percent. This was the smallest advance of the year, and a meaningful step down from September’s 8.2 percent. The core number (excluding the volatile food and energy categories) rose 6.3 percent year-over-year versus expectations of 6.5 percent. This was an important moment that markets had been waiting for because it gave the Fed some breathing room as it relates to the pace of future rate hikes. This was essentially confirmed by Fed Chairman Powell this week when he indicated that the Fed could slow the pace of rate hikes as soon as December. Inflation could be cresting not just here but around the globe, with the most recent inflation reading from Europe coming in below expectations.

We also had an election in this country last month. November’s midterm elections produced few major surprises; Republicans gained control of the House, as expected, albeit with a smaller margin than some predicted. The conventional wisdom is that a divided Congress is favorable for markets, with neither side able to proceed with major new initiatives or sweeping legislation. The one wild card that could create some near-term volatility would be a looming fight over the debt ceiling and the brinkmanship that could accompany such a debate.

Of course, as tends to be the case in markets, politics comes second to earnings. The third quarter earnings season was surprisingly strong, with most companies reporting earnings growth that was stronger than expected. Operating margins ticked up slightly. Even so, overall earnings growth for the quarter was the lowest since the third quarter of 2020. In other words, even though the results were better than expected, they weren’t particularly strong. The Fed’s actions are clearly impacting the economy. We’re seeing layoffs announced among big tech companies and the housing market is in a medically induced coma. Employment remains historically strong though, so while the Fed may slow the pace of rate hikes, short-term rates will continue to rise, at least for now. The market is pricing in higher rates through next summer, although by this time next year, rates may be falling again.

The yield curve is telling us that the Fed is taming inflation; moreover, it is also likely telling us that there is considerable economic softening ahead. The difference between the 2-year Treasury yield and the 10-year yield recently reached 78 basis points—the biggest inversion since 1981. This strongly suggests economic weakening.

Will there be a recession in 2023? Maybe and maybe not, but we wouldn’t be making sweeping changes to prepare for one. Slowdowns and recessions are the natural part of the business cycle. Markets have begun to discount this already—the price-to-earnings ratio for the S&P 500 was well north of 20x at the start of the year, but it has fallen to 17.6x. That’s only slightly above the 25-year average of 16.8x. Broadly speaking, markets are just not that pricey. Historically (not to mention intuitively), that has tended to augur well for future returns.

For more information, please reach out to:

Monthly Market Dashboard: Will the Groundhog See The Fed’s Shadow?

A Conversation with Trust Company President and CEO Bill Smith

In this episode of Trust Company Talks, hosts Bill Noble and Burke...

A Year in Review & What’s Ahead: A Webinar with Dimensional Fund Advisors