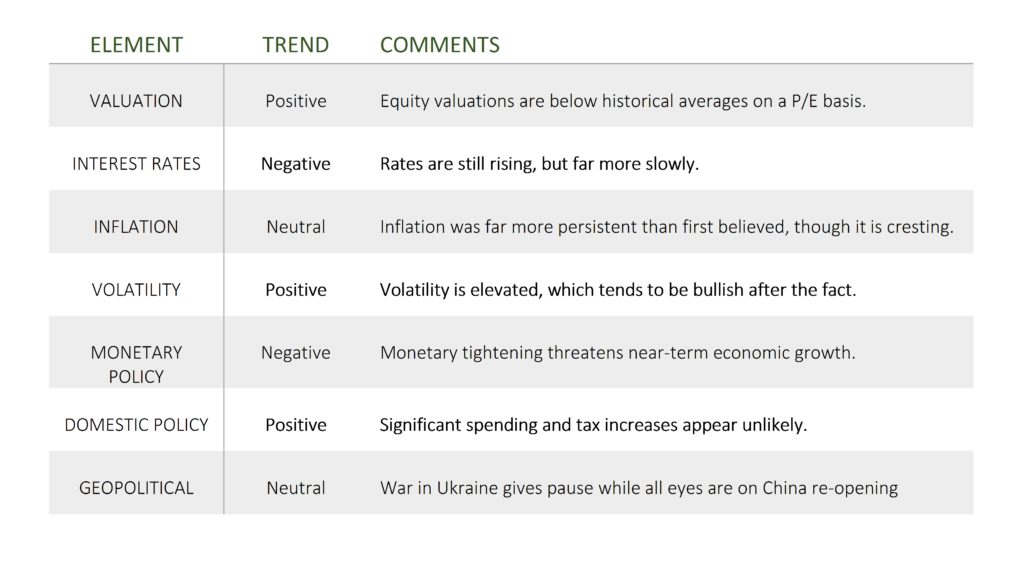 Going Below the Hard Deck

After seven consecutive quarters of positive returns, the markets have now coughed up two quarters in a row of negative returns. The broad market selling that first appeared during the first quarter continued during the second quarter, with the S&P 500 posting a total return of negative 16.1 percent. The other major domestic indices were also negative, with the Dow Jones down 10.8 percent, and the tech-heavy NASDAQ down 22.3 percent. Frankly, the second quarter’s only positive development appears to have been the debut of Top Gun: Maverick.

There were bogeys everywhere throughout the first half of the year, which was the worst performance to start the year since 1970. Just stating for the gloomy record, the S&P 500’s total return for the first half was negative 20 percent, while the Dow was down 14.4 percent and the NASDAQ was down 29.2 percent. The S&P 500 officially entered a bear market on June 13, closing more than 20 percent down from its January peak. While the second quarter did not match the first quarter’s peak volatility, the selling that began in January and February came back with a vengeance in April and then again in June. One could not be blamed for holding on too tight and losing one’s edge.

Just like in the Top Gun films, the second quarter’s villains were Russians (1986 film) and also a mysterious source of hostility (2022 film). That hostile foe was inflation. Inflation and the expectation of higher rates caused a broad revaluing of the market during 2Q. This continued to impact prices of longer-duration assets more than shorter-duration, value-oriented assets. However, the trend reversed somewhat during June, with new probability emerging that rate hikes and tighter monetary conditions might cool the economy sooner and to a greater extent than had been expected. This sentiment appears to be ascendant, with growth stocks staging a bit of a comeback and beating value for the first time this year in June. This has continued into July, which has featured a decent market rally so far. 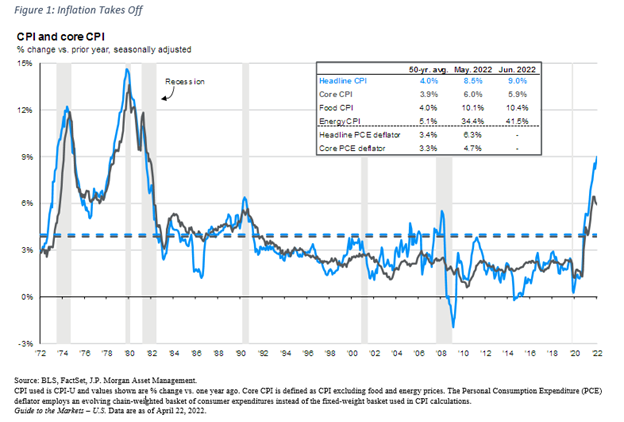 The Fed appears quite keen to avoid letting inflation take root, though the labor market continues to buzz the tower. Even so, signs are emerging that the Fed’s tightening cycle is closer to the end than it is the beginning. Ten-year treasury yields, which hit almost 3.5 percent on June 14, have fallen almost three-quarters of a percentage point. As one might expect, this has provided some relief to financial markets, with the S&P 500 up more than 11 percent since June 14 and the NASDAQ more than 14 percent.

“Because I Was Inverted”

Maverick’s words to his instructor as he was explaining how he obtained a Polaroid of a then-new MiG fighter, could have just as well described the yield curve this month, with the 10-year plummeting faster than that fabled MiG-28 in a 4G negative dive. Though the difference between the yield on the two-year Treasury and the ten-year went briefly negative in April, it has gone consistently negative this month, suggesting that an economic recession is on the horizon. Inverted yield curves don’t always mean a recession is coming, but no modern U.S. recession has happened without being preceded by one. 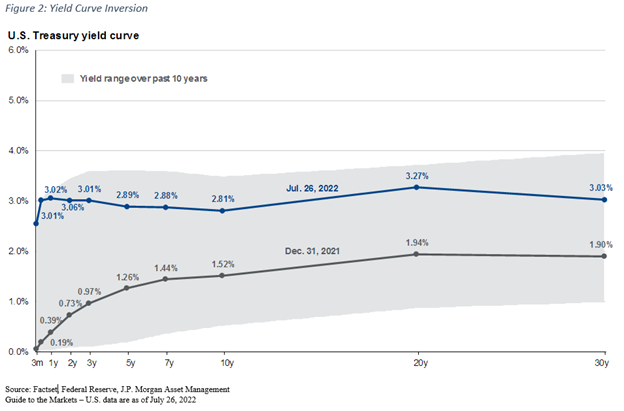 Moreover, the more hawkish Fed appeared at a time of historical change in fiscal support for the economy. Last fiscal year, the federal budget deficit clocked in at 12.4 percent of GDP—this coming fiscal year, it is expected to be less than 4 percent—that’s the largest decline as a percentage of GDP since the aftermath of World War II.

So, what would a recession mean for the prices of financial assets? Well, of course, it would depend on the depth of the economic malaise, but it’s worth noting that the market has likely already discounted a significant amount of slower growth. That’s what this year’s re-pricing has been all about. To start the year, the forward P/E ratio on the S&P 500 was around 22.0x—this week it was below 16.5x, which is below the benchmark’s 25-year average. There are ample reasons to conclude that a recession would be mild, given the otherworldly strength of the labor market and the comparative lack of leverage on corporate balance sheets. 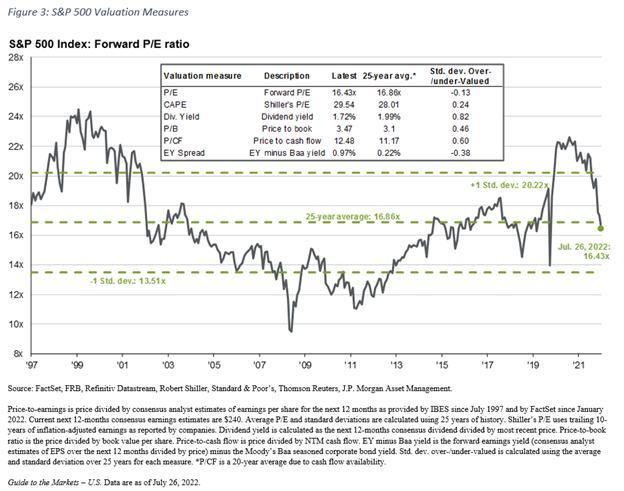 “This Is What I Call A Target-Rich Environment”

During the two-year period ending June 30, the S&P 500 returned almost 26 percent. Value outperformed growth by a mile, with the Russell 2000 Value Index returning 44 percent during that period while growth was basically flat. Value tends to outperform during periods of market turbulence, particularly when that turbulence is caused by economic growth in overdrive.

However, circumstances can change in a hurry. With forward rates behaving like they’ve just flown through Iceman’s jet wash, suddenly volatility is falling and prices are rising again. While this particular set of circumstances does not necessarily favor strong relative performance by value vs. growth, it could be constructive for overall markets in the near term. Of course, if inflation persists and the economy powers ahead, value could be expected to outperform, though overall returns might be lower. One thing is for certain, historically it has been easier to markets to rise after they’ve been trading at less than 16.5x forward earnings than when they’ve been north of 22.0x, as the chart below illustrates. 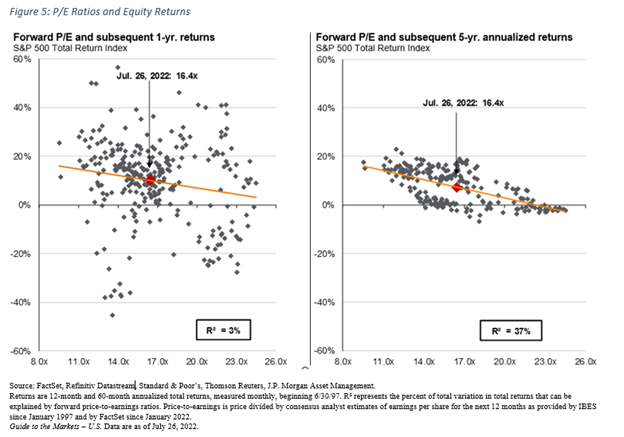 After a first half that stunk worse than Slider, markets are experiencing strong crosswinds. Covid-19 continues to bedevil us, but nothing like before; the virus’s primary effect at the moment is through China’s struggles with full economic re-opening as it pursues a Zero-Covid policy. Inflation may well have crested, as commodity prices have been falling. On the other hand, much tighter fiscal and monetary policy will present real headwinds for the economy going forward, and it would be foolish to count on a Goldilocks scenario in which the Fed gets everything just right. In short, the market is as complicated a beast as ever, and it remains our view that “time in the market” is far more important than “timing the market. As the chart below demonstrates, for the last 71 years, the longer one’s time horizon has been, the more likely one was to experience positive outcomes. 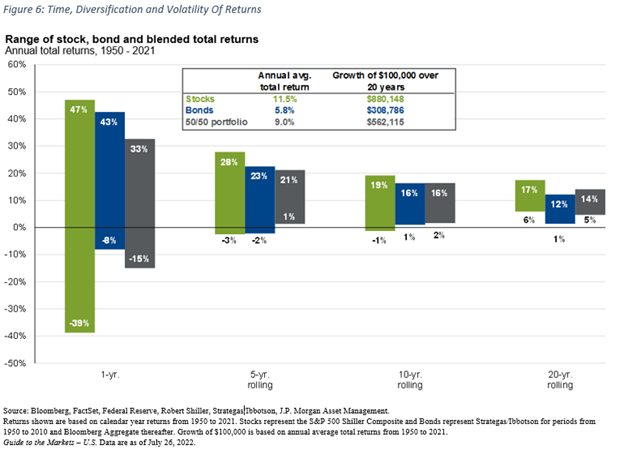 While we are not managing client portfolios by trading in and out of every market decline or rally, you can be assured that we continue to monitor markets with an aviator pilot’s eye. Moreover, while we are not attempting to predict every minute of the future, we can confidently say that equity portfolios are performing as we might expect in this environment, with our value tilt having provided a significant tailwind to performance.

We thank you for your continued trust in our stewardship.