Rising Rates and Your Bond Portfolio

Recently, our son lost his first tooth. (Actually, it was his third lost tooth. We suspect he swallowed the other two. But this was the first instance where he would interact with the Tooth Fairy.) After we explained the mechanics of the tooth-for-treasure trade, he drifted off to sleep. My wife and I then debated the going rate for a tooth. What did we receive as children? Did those amounts still apply? Or did we need to adjust for decades of inflation?

The two of us were not the only ones thinking about rising prices. Optimism about a post-COVID recovery pushed up inflation expectations in the first quarter of 2021. Bond investors, who receive fixed coupon payments, began requiring higher yields to account for the anticipated loss of purchasing power. Higher expected demand for money in a normalizing economy also helped to nudge rates upward. 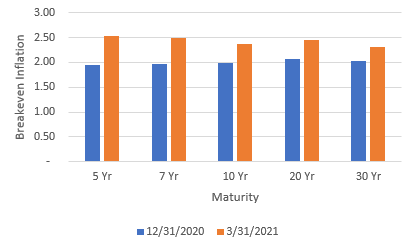 The change in interest rates was not uniform, however. Most of the action was in intermediate- and long-term yields. As short-term rates were stable, the yield curve “steepened”. It is not uncommon for different maturities to behave differently. Not long ago, there was fear that the yield curve would “invert” where short rates would exceed long rates. Normally longer bonds yield more than shorter bonds as an investors’ capital is at risk for a longer amount of time. This is known as the term premium. 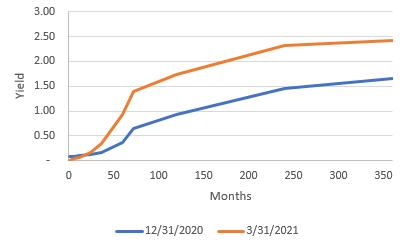 It is difficult to consistently predict what rates will do, at what magnitude, and when they will do it. Making such guesses can damage your portfolio. Some investors, convinced that rates would rise, concentrated their holdings into short-term debt. This debt, which is less sensitive to rate increases, should offer protection, they reason. As noted above, though, short bonds normally yield less than their longer counterparts. So, there is a cost to this perceived safety. Additionally, the curve could “flatten” where short rates rise or long rates fall. Being concentrated in near term bonds could mean a principal loss or missed gain, respectively.

Alternatively, low interest rate environments may tempt an investor to reach for yield and hold more long-term debt as longer maturities usually mean juicier payouts. But maturities that are further away are more sensitive to rate moves (the bonds fall more in price when rates go up), and an investor could get burned by rising long-term yields.

Rather than guess what rates will do or make yield-driven bets, diversification can increase return and lower risk. Owning bonds of various maturities means exposure is spread across time and lessens the impact of rate moves in specific segments of the yield curve. Expanding holdings to various sectors of the bond market adds securities that behave differently to a portfolio. Higher coupon corporate bonds, for example, may increase credit exposure but reduce interest rate risk. Similarly, government-backed mortgage bonds comprised of adjustable-rate loans can lessen sensitivity to yield changes. Lastly, adding foreign bonds means less money is exposed to the US interest rate environment and American inflation expectations.

Periodically assessing market conditions can improve risk management without having to outsmart the market. For example, if longer-term bonds yield the same or less than short-term bonds, it may not make sense to bear the risk of a later maturity. Likewise, if less credit worthy bonds are not offering a sufficient premium to hold them versus safer alternatives, an investor can abstain until the reward becomes commensurate with the risk level.

The recent uptick in interest rates has caused some bonds to decline in value. It is important to remember that this is only one piece of the return. The coupon payments from the securities must be considered, too. This income lessens the impact of value dips due to rate increases. And, like stocks, when bond prices fall, their expected return goes up. These are silver linings to remember as bond markets adjust to new expectations. Diversifying across countries, maturities, and creditworthiness helps a portfolio reduce bumps in the road and capture return opportunities without having to know the future.