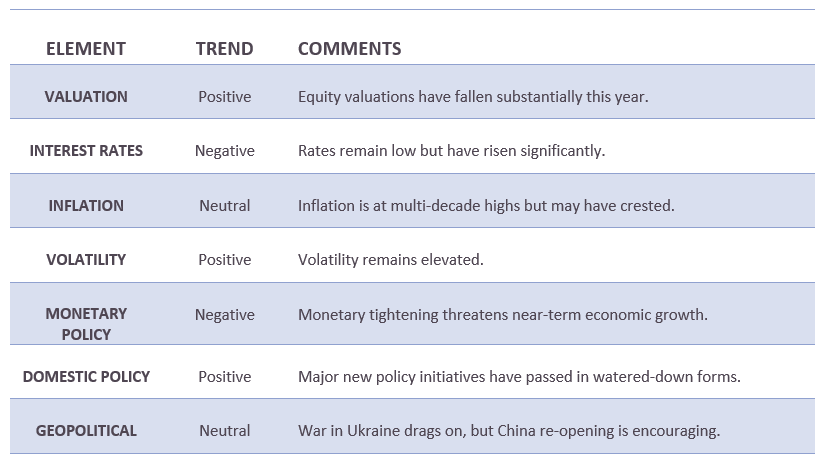 After a buoyant July, markets turned lower in August, spooked by signals from the Federal Reserve that the specter of inflation would justify further monetary tightening. Markets darkened leading up to Fed Chairman Jay Powell’s remarks in Jackson Hole, WY last week, where the chairman made clear that the fight against inflation was far from over and basically acknowledged that Fed tightening was already causing the economy to slow.

While U.S. markets ended the month with just low-single-digit losses, the pain seemed worse because the month has started out strong. While the S&P 500 finished 4 percent lower for the month (total return), it was down 8 percent from its intra-month high on August 16. Bond yields, which move in the opposite direction of bond prices, rose steadily all month.

It would be an easy narrative to write that fears about persistent inflation caused stocks to move lower during the month, but it wouldn’t really be that accurate. While yields moved up, which one might expect as the market’s expectations for additional rate increases rose, the fear in the market seems to be more about the economy, which shows signs of slowing. Powell’s remarks seemed to drive home the reality that the Fed’s actions are already causing the economy to cool, and he sought to convince everyone that the central bank would continue to tighten as warranted, on which he seemed completely credible. But Powell seemed slightly less confident that the Fed is even winning the inflation fight at the moment, which was a little nettlesome, and his speech indicated he was girding for economic trouble. The gist of the message was as follows:

Restoring price stability will take some time and requires using our tools forcefully to bring demand and supply into better balance. Reducing inflation is likely to require a sustained period of below-trend growth. Moreover, there will very likely be some softening of labor market conditions. While higher interest rates, slower growth and softer labor market conditions will bring down inflation, they will also bring some pain to households and businesses. These are the unfortunate costs of reducing inflation. But a failure to restore price stability would mean far greater pain.

Pain? Did someone say pain? The VIX Index, which measures market volatility—a kind of risk proxy—spiked hard in the back half of the month, as traders reassessed risk. Of course, counterintuitively, a more volatile market is a more attractive market for long-term investors, though it can cause a little pain in the near term.

But meanwhile, what does near-term economic pain mean for markets? Well, as always, it’s complicated, and it seems especially complicated at the moment. Many of the world’s most successful hedge funds, staffed by “the best and the brightest,” are experiencing historically bad performance years, as economic signals collide and old models prove insufficient to predict the future amid a backdrop in which central banks are no longer pouring punch into the punch bowl. For years, central banks around the world were tasked to stimulate sufficient demand to meet the seemingly infinite supply curve, as globalization drove input costs further and further down. It’s a different deal entirely for a central bank to tamp down demand to rightsize it for constrained supply.

Globalization appears to be taking a breather at the moment, as companies focus more on building redundant systems and finding strangely scarce workers in the post-pandemic world. Rising rates tend to be a headwind for all asset classes, and a slower economy likely means lower corporate earnings. In equities, slower growth would tend to favor growth-centric strategies over value-centric strategies all else equal. Growth beat value for the third month in a row (Russell 2000 Growth (-0.9%) vs. Russell 2000 Value (-3.1%), but all else isn’t equal. With rates rising and receding liquidity, growth has its own challenges and trails value by almost 1000 basis points year to date. And when growth stocks miss earnings estimates and fall, well, that’s not pretty to watch either.

The thing about inflation is that the longer it lasts, the longer it lasts. Former Fed Chairman Paul Volker rightly observed back in 1979 that “inflation feeds partly on itself.” The Fed is absolutely going to rein inflation in, but the collateral damage on the housing market, corporate earnings and corporate credit is likely to be significant—in fact, that’s really the point. Does that mean long-term investors should sell stocks? No.

Monthly Market Dashboard: Will the Groundhog See The Fed’s Shadow?

A Conversation with Trust Company President and CEO Bill Smith

In this episode of Trust Company Talks, hosts Bill Noble and Burke...

A Year in Review & What’s Ahead: A Webinar with Dimensional Fund Advisors